Harry Potter, Jurassic Park, Spider Man- been there, done that!

Universal Studios, to be specific, Island of Adventure could have been the place where all these movies happened and I wouldn't know it. 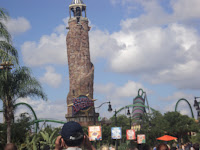 We started with the one highest in demand-HP theme Park

Some of the rides we went for here was the forbidden journey, which took us into corridors of hogwarts, flight of the hippogriff, a roller coaster which resembled a hippogriff. and the dragon challenge, which is the scariest ride i've been on up till now.

After then came Jurassic Park.

This was the point of time when mom and dad took time off while we jumped around. That happens a lot these days! We end up going uselessly back and forth the place and ultimately come back to find them at the same place!

Apart from that we went for the Jurassic Park River Adventure, which was a water ride (it didn't get us all that wet) . Dad wanted to go to these things called Pteranodon Flyers. But turned that the ride was for small kids, and you could only go if you were going for the purpose of accompanying a kid. Dad wanted to go so badly, that he tried convincing the guards that I was a kid! Well that didn't turn out to well. So Camp Jurassic and River Adventure were the only rides we ended up going for!

Next we went to Marvel Super Hero Land. Here we went for the Spider Man Ride. It was a 3D virtual reality! We ended up waiting in the queue for really long. There was some technical error and for about 15 minutes they stopped running the ride!
Well luckily they had some interesting things on the walls of one of the rooms in which we stood in the queue. They were things from the daily bugle (the newspaper in which Peter Parker worked in as a photographer). Here are some of them!

We went to Toon Lagoon next. They had all these comic strips everywhere in the streets and cartoon cafes and everything!

Today we dropped by Kennedy Space Center. I didn't expect it to be so much fun.

We started our day with a 2 hour long bus tour. They showed us some sites there.

Later we hung around in this visitor's complex. They had this model of an airplane there where we could go inside and see what it really looked like.

We also went for a virtual reality ride. It felt as if we were really going into space.
Then we went to the I-Max theater and saw this 3D movie called Hubble. It was amazing! It was about this space telescope hubble which takes photographs and sends them back to the earth. It's been up there for a while and is already pretty deep into the Universe.

It was incredible seeing the kind of highly intellectual work the guys here are doing. Hope there are many more to come!
And like always, we ended up fooling around at the end of the day.
at 9:03 PM No comments:

We visited Sea World today. It was so much fun!

We went to a couple of shows and also some roller coasters!

The first show we went for is the Shamu Show. It had killer whales doing all kinds of things.


Then we went to another show called "Call of the Ocean". It was mostly acrobats impersonating life at sea.
After that came the Clyde and Seamore show! That was the best. This one had seals in it. They had this whole story that they acted out on sets which looked like those of pirates of the carribean!


Next came the whale and dolphin show. Although the whale never came (apparently it wasn't in a mood to perform), the dolphins were amazing! There were acrobats in that show too.

We also went on some roller coasters.

And here is some other random stuff we did-aquariums, getting airbrush tattoos, and just hanging out!