Why I hate haircuts

Most females get the shock of their lives at the age of 40 when one fine morning their hair brushes produce a grey hair. I, a mere 17 year old, suffer the trauma every 3 months, when I notice the split ends of my hair.
It means it's time to get a haircut.

I despise haircuts. I hate those quarterly trips to the beauty salon. 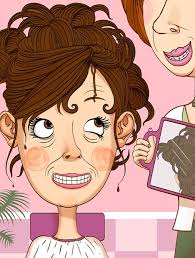 That can be surprising for most of you out there, considering that I am a teenage girl, who should ideally wait for those times. But funnily enough I don't. Here's why!

* Layers or Steps?
Deciding which hair style to get this time is a pain. Getting the same one you got last time just adds an element of banality to your life. But getting a new one comes with the risk of 3 months of hair trouble.
I usually let the hair cutter do what he wants. But every once in a while it does not turn out very well.

*Ouch!
Getting a hair cut can be awfully painful when your hair cutter is in a hurry to go flirt with the waxing lady. Although I religiously brush my hair a hundred times before leaving the house for a haircut, the dude always finds a knot or two which he yanks so hard that I fear leaving the salon with a bald spot.
And since he's busy watching the television or talking to the hair cutter next to him, he does not notice the furious expression on my face that wants to pick each and every hair of that streaked head of his.

*No, I DO NOT want to use your shampoo.
There are some hair cutters who are extremely chatty, while they snip and snap the scissor around your head. While I'd prefer the chatty ones to the ignorant ones, they chatty ones can often get pretty annoying.
In the middle of the conversation, just when you are beginning to alter your opinions on haircuts, the hair cutter starts talking about how you should buy the amazing shampoo cum conditioner that the salon has come up with. It makes your hair smooth and silky and shiny. And guess what! NO chemicals!
When the guy is marketing and cutting your hair at the same time, you do not want to offend him too much. Not at the cost of a bad hair cut!


Sometimes I wish my hair would cut itself. No salon, no hair cutter.
But THAT is something I will just have to leave to the future.


Any other complaints against hair cutters people? Let me know, in the comments below ;) 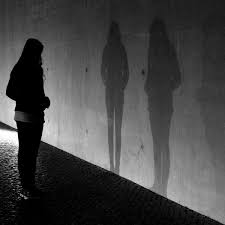 As soon as you open the door to my room, a poster taped to the wall on the other side greets you. It says 'Welcome to my reality'. It's pink in color which is one of the reasons I bought it as a 14 year old. I remember the day very clearly. I went to an Archies and bought 5 or 6 posters to put up in my room.
It was a trend to have posters in your room with sarcastic comments on them. I bought a garfield poster which said 'I'm not always right, but I'm never wrong'. I bought another one saying 'Those who think they know it all, really annoy those of us who do'.


My dad helped me stick them to the wall with double sided tape.
A few minutes ago as I thought about how I had outgrown them and debated about whether I should take them off or spare the risk of making my room look plain with empty walls, I remembered the thoughts that ran through my head as I looked at my new posters after my dad and I had put them up.


I thought of how I would be the person my posters made me. I could keep my room messy so that people would believe that to be my reality. The funny quotes on my posters would make those lines seem like my own. Garfield's relaxed and egoist attitude would make mine seem the same.
This was the point where the mask started coming into existence. I am not refering to the green coloured mask of Jim Carrey's from the Hollywood movie, but if you can relat le to that you'll probably get what I'm trying to say.
Every adult human has a mask.  They use it make their friends like them, to seek approval from their bosses, to make the opposite sex want them.


And before they can even breathe in what's happening, the mask that they try to use to be accepted is not a mask anymore. That's right, it's as if you wore a mud pack for so long that now either it won't come off or either you'll be so used to it that you won't notice it's there!
Until off course death do you part!

The posters in my room suggested that I was a mischievous, messy and a socially outgoing teenager. I was actually the opposite. I was quiet,  very organized and super responsible. I was a 9th grader trying to fit in. But I so succesfully convinced myself that I now find I am actually the person I always tried to be.

And that is exactly what happens to more than half of our world population. (the other half lives in poverty)
They make themselves what the world wants them to be, who they want to see in their mirrors every morning. The glamour gets to them.

In other words they are show boys and girls, tuning themselves to please the world. To make everyone who passes by in the streets give them a venerable smile.
But that can't end well be because even if you manage to please every person on the planet (which is practically impossible considering the kind of bipolar diversity our earth holds ), you will fail to please yourself, which is ultimately the only thing that actually matters.


So much for being a show boy/girl.


Might as well sit in your room of empty walls with a bowl of popcorn and a remote control in your hand and enjoy the world that you create for yourself.
at 11:21 AM No comments: